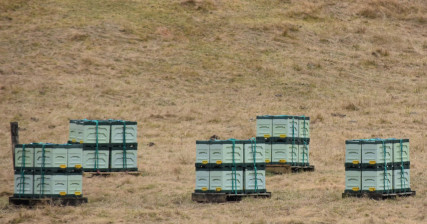 A good friend of mine is keeping around 230 colonies, up from about 160 colonies last year. He had terrible overwinter losses last year and started the season feeling very discouraged.

Amazingly, he goes into this wintering season in really good shape. He harvested a relatively small crop, but put a lot of effort into preparing for next season. He made a plan, asked a lot of questions and worked hard to make sure he followed through on his plan. To his credit, all his colonies now have young queens and plenty of bees, were treated early, and are carrying fairly solid loads of honey to winter on. This is a recipe for success.

One of the areas my friend did well in was being humble enough to understand he had some issues that needed addressing. He bit the bullet and made plans to change some of his behavior and some of his processes. He picked my brains on things he needed help with and then did the work needed. I am very impressed by what he has achieved. He goes into this coming winter with peace of mind and next spring should face the coming season with lower losses and far better colonies. Well done mate!

At this time of year most beekeepers are ready for a break. We all need it by this time. Reality is, even though you may have worked hard, you may not be ready for winter. Planning is critical to success and if you haven’t planned, you’re likely to meet spring not really in the shape you could have been in. You may be nervous about what you’ll find when you open your hives sometime in August. It’s probably too late to change that now, however, you can change future seasons.

Before you turn your brain into winter mode there are a few things you can do;

1. Be humble and admit you could have done things better.

2. Think honestly about the areas you didn’t do so well in this season.

3. Write them down and start to form a plan so you don’t repeat the same mistakes next season.

4. Also think a little about what you’re likely to face in the Spring and how you might remedy that.

5. If you have questions that you don’t have answers for, find someone who does. Either a better qualified beekeeper or someone online (look for someone tried and true) and put aside some of your downtime to search out the answers.

6. Then listen, make a specific plan and follow through on it. My friend will then be in good company.

Andrew Stratford is an apiculture consultant with 30 years beekeeping experience, including as a current business owner. He forms part of MyApiary’s management advisory team.

See the original article at: https://www.apiaristsadvocate.com/post/post-season-planning